We invite you to a night with 3 short documentary films by award-winning and independent filmmaker, Tzeli Hadjidimitriou.

“A rose is a rose no matter how you call it”

Synopsis
Dimitris lives her life in Skala Skamnias, the conservative Greek fishing village where she was born. She nursed her dying parents and now lives alone, able, at last to enjoy her femininity by dancing in the street to old pop records, watched by her cat.

Misunderstood by family but celebrated by journalists covering the refugee crisis, her resilience is captured by the camera. She recalls time spent away from Lesvos and conscription into the Greek army. Gently observed and interviewed by a Lesbian film maker similarly aware of what it means to grow up different in a tiny traditional community, their shared humanity and mutual respect shine through this touching biographical film. 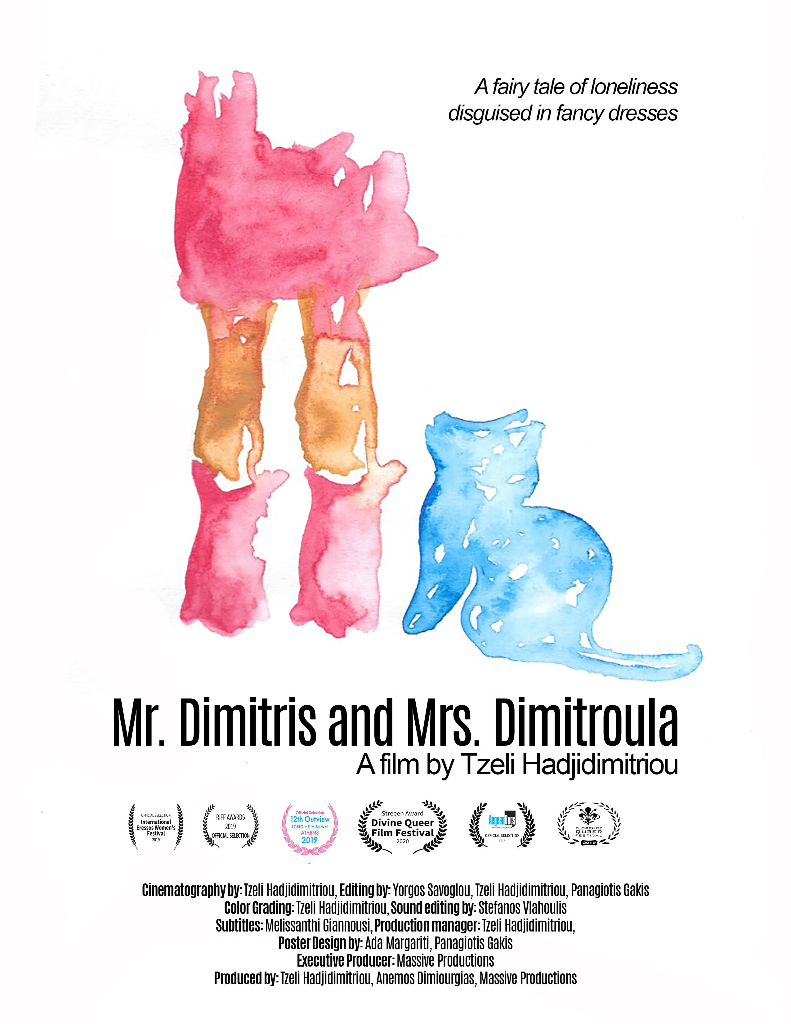 Synopsis
Making their own mark … Sappho’s Granddaughters presents seven women of Lesvos: Aged but strong in spirit, grounded in the soil and history of the island, recalling life with humor and wisdom. Angeliki throws away the photos of those who have passed away, Myrsini sings a capella an Amanes song in the living room of her country house, a woman in the park caresses her cat, a substitute for her dead husband, the Three Graces remember their youth laughing, and Foto proudly claims that she never cared about marriage, because she wanted to be free. Sappho’s Granddaughters ask for nothing except to be recognized as the heroes of their own lives.

Sappho’s Granddaughters is part of a series shot in Lesvos, during the financial and migrant crisis under the title Silent Path. The series is filmed with a poetic approach, without seeking the classic documentation. It deliberately follows the natural course of the meetings with the characters, without aiming at a pre-determined outcome, leaving space for emotions and the unexpected. The aim of the series is to give a voice to everyday people who live their lives quietly, but know how to share, laugh, create, love, endure and keep on going with dignity, preserving a way of living in harmony with their environment. This is the “intangible cultural heritage” of Greece of Europe, the culture of everyday life of ordinary people with knowledge, practices and traditions, that are often deeply rooted in time, and to this day still define our collective memory and identity. 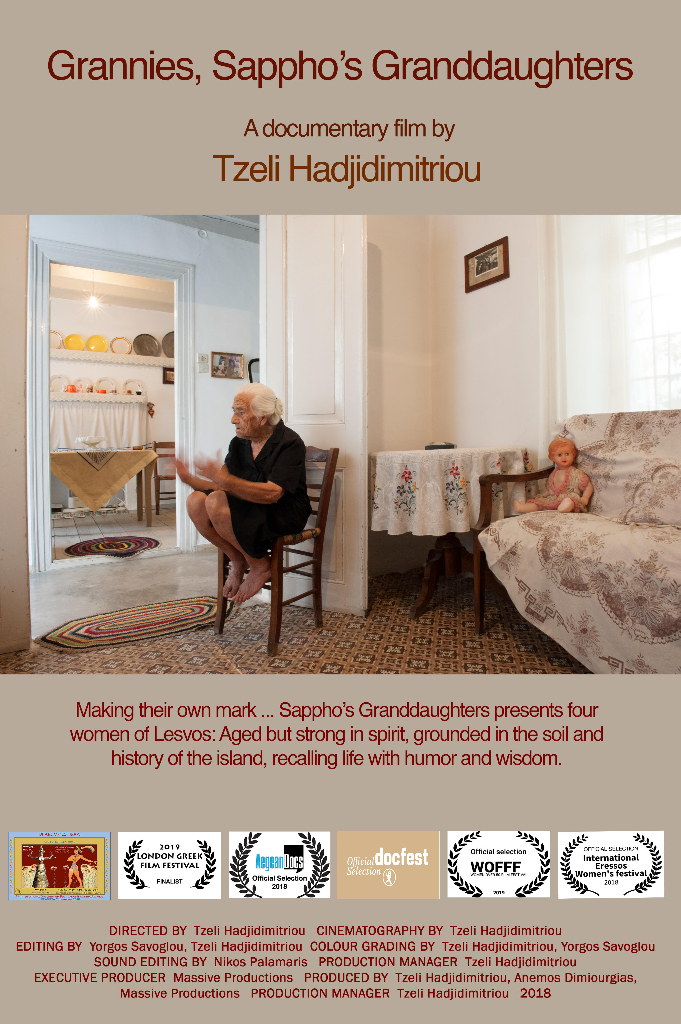 Synopsis
Sappho Singing. A woman’s love and legacy across millennia in a timeless Lesbian landscape.

For the first time, the lyric poet Sappho is presented as a modern woman whose opinions about equality and art still matter 2,600 years after her death. This time round she turns up in her birthplace, the remote village of Eressos on the Greek island of Lesvos and moves among its modern-day inhabitants. The stunning coastal landscapes, provide the backdrop for this unique lesbian-made production. Charmingly, a close harmony trio in twenty-first century guise sing traditional songs, recalling these lost loves. Sappho is reminded that the girls she once loved have gone, but when she moves to the nearby beach resort in summer she discovers scores of women ready to party and she takes full advantage.

Sappho’s poems resonate down the ages in this humorous and touching film about love and legacy, based on a 2010 play by the acclaimed veteran writer Maureen Duffy. 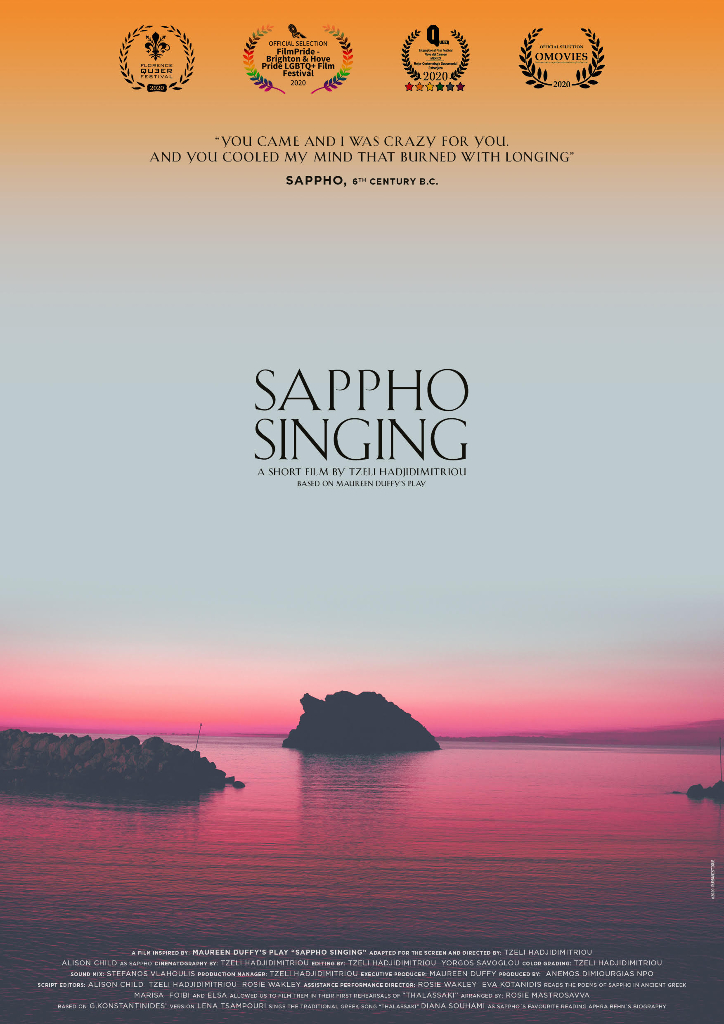 Tzeli Hadjidimitriou is an award-winning independent filmmaker, fine art photographer, and writer. She was born and raised on the island of Lesvos, Greece.

Tzeli has published books in Greek and English, including her bestseller, “A Girl’s Guide to Lesbos”, the first ever attempt to present the island of Lesbos in a guidebook format in a way that connects it with the “L wor(l)d”, the ancient poet Sappho and the present history of the lesbian community in the village of Eressos.

She has an expert understanding of Sappho’s poetry and regularly works as a consultant for BBC television on programs about Sappho and Lesvos. She studied Direction of Photography for the cinema in Rome. She worked for many years on Greek television series and films, collaborating with almost all TV channels and major Greek directors and producers. Her films have been screened all over Europe. Her film Mr. Dimitris and Mrs. Dimitroula about a trans man who lives in a small village in Lesvos, won the Streen award and went viral after the unfortunate, violent death of Dimitrakis. in 2020 her documentary, “Sappho singing”, won the Best Foreign Short Documentary at the Queer International Film Festival, Playa del Carmen, Mexico. The film is placed in the Eressos of today, depicting the reality of today’s lesbian community in connection with the rich ancient history of the place. Her next feature film, Λesvia will be on the story of the lesbians who are coming for over 50 years in Eressos.

Her photography work is shown in museums and galleries in Greece and abroad.